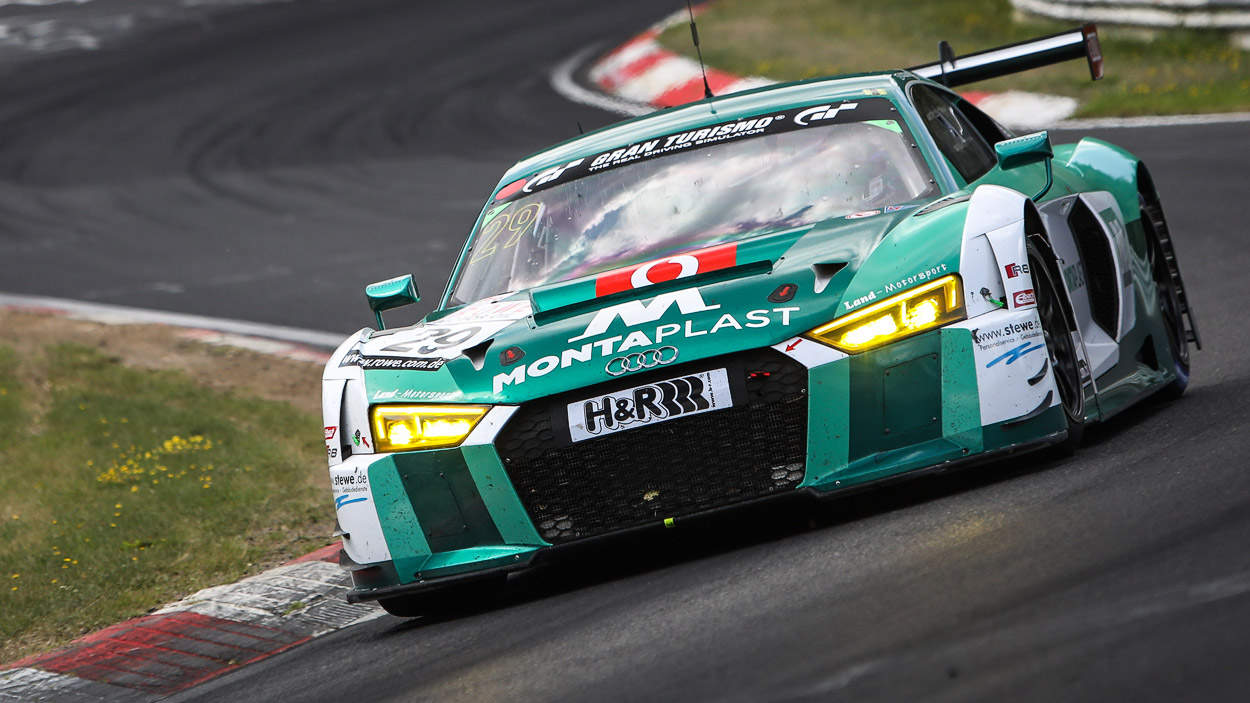 MONTAPLAST by Land-Motorsport’s fight for victory in the sixth VLN Langstreckenmeisterschaft on the Nürburgring ended prematurely. The team was in the lead, but had to abandon the Audi R8 LMS at halftime due to tyre damage, dashing Sheldon van der Linde and Jeffrey Schmidt’s hopes of success in the “Green Hell”.

“Although we didn’t reach the finish line, I think we can be satisfied with our VLN start”, concluded team manager Wolfgang Land. “After our performance in the season’s first half, the return was looking good. Sheldon and Jeffrey did a great job and they would have deserved to win.”

Until the failure, things were going according to plan for the Niederdreisbach squad. Sheldon van der Linde had started from fourth on the grid and built up the pressure on his closest rivals, the two Falken cars at the front of the field. The many fans on the Nordschleife witnessed a sensational fight between the three drivers, from which the South African initially emerged as the leader till the 15th lap, when tyre damage forced the 19-year-old to quit the race to victory.

Like his young team mates, “Ronny C’Rock” was also swiftly on the move in the Zolder DMV GTC. But unlike things at the Nordschleife situation, luck was on the Audi driver’s side to the end of both races and his win in the first and a second place in the subsequent race tied up his successful Belgium weekend.

Alex Riberas to start on Sachsenring

MONTAPLAST by Land-Motorsport continues to the ADAC GT Masters at the Sachsenring from 7th-9th September. This second-to-last round of the “Champions League of Sports Cars” sees Alex Riberas behind the wheel for the first time on behalf of the long-standing Westerland team. The Spaniard is substitute for Jake Dennis, who can’t compete due to a clash of dates. Riberas will be supporting Christopher Mies in the fight for valuable championship points.

“I’m very proud to be helping my friend Christopher and the Land team at the Sachsenring”, says Alex Riberas regarding his driving engagement. “Being part of such a fantastic line-up in such a tough series is a big honour. I’m really excited about it and my thanks go to the team for their confidence in me.”